Hannity Guest Goes Ballistic, Rips Out Earpiece Over Charge That Black Conservatives Have ‘No Freedom Of Speech’ 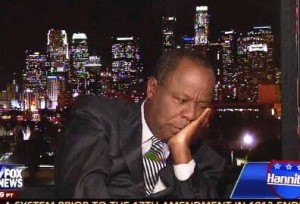 Sean Hannity‘s Monday night show got heated… to say the least. Inviting on radio host Leo Terrell and Niger Innis, national spokesperson for the Congress of Racial Equality, the Fox News host sought to debate the media treatment of Dr. Ben Carson, who’s become a conservative hero of sorts since spoke “truth to power” at the National Prayer Breakfast. The panel quickly descended into a chaotic shout-fest, however, with Terrell eventually ripping out his earpiece in frustration.

Since the prayer breakfast and the following remarks about gay marriage, Carson has been “vilified by the left,” Hannity asserted. Beyond those details, the bigger issue, he asserted, is that “if you’re African-American and you’re a conservative, you are vilified. You are demonized, you are called names, you are attacked. That is the ongoing epidemic that goes on. There’s no freedom of speech for African-American conservatives in America.”

“You created a monster!” Terrell told Hannity, wasting no time in getting loud. “You have elevated this guy to 15 minutes of fame.”

The pair shouted over each other until eventually Innis jumped in, serving as the segment’s Calm And Conservative contrast. Deeming Carson a “hero” and credit to the human race, Innis argued we need more Ben Carsons in the political arena.

Later in the segment, when Innis went on to comment on the “litany of horrors” we’ve seen from left-wing speakers, Terrell charged him with being an “apologist” for Fox News and Hannity. To that charge, Innis countered saying he would be more than happy to appear on other networks but there’s “censorship” prevents that.

As Hannity attempted to bring in the Obamas’ Easter sermon controversy into the discussion, Terrell refused, saying he wanted to stay on the topic of Carson. Eventually, at the end of the segment, Terrell took out his earpiece, giving up altogether.