Hannity in Epic Shoutfest with Dem Rep. Over Obamacare: ‘Cut the Crap and Stop Lying!’ 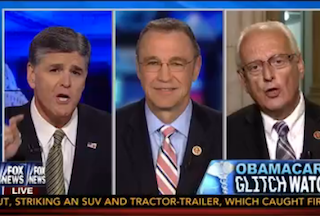 Rep. Bill Pascrell (D-NJ) found him self in a vicious debate with Sean Hannity on Fox News Thursday night over exemptions that businesses and members of Congress receive for the Affordable Care Act that individuals do not. Pascrell refused to accept Hannity’s premise about the exemptions, fighting back hard against him and Rep. Matt Salmon (R-AZ). “Regardless of what the folks say, this is going to be successful,” Pascrell said of Obamacare. “And they don’t want it to be.”

“I have said I won’t take the subsidy,” Rep. Salmon said the of the exemption for Congress. “I’m not taking it. I think we should live under the same laws every American does.”

“I don’t have the federal plan,” Pascrell countered. “I have my own plan. So you don’t know what you are talking about.”

From there, Hannity began accusing Pascrell of lying, yelling at him, “You’re getting special perks and special breaks for yourself, absolutely. So cut the crap and stop lying to the audience!”

Things got increasingly heated, with all three men speaking at once until Hannity broke through with this message for Pascrell. “Do you know what your problem?” he asked. “You are an elitist. You think you are above the American people.” When the congressman tried to tell Hannity what his “problem” is, he shot back, “My problem is people who lie on this program. You’re lying to the American people.”

“Don’t you dare call me a liar!” Pascrell said, insisting he doesn’t have a special subsidy that the rest of America can’t get.

Finally, Hannity pulled a Mitt Romney and offered to make a $10,000 bet with the congressman with the winnings going to the charity of his choice if he’s right. Pascrell did not take the bet.