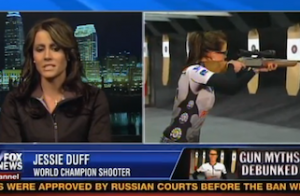 On his show tonight, Sean Hannity welcomed back competitive shooter Jessie Duff, who recently demonstrated a variety of semi-automatic weapons on Fox News, to help “debunk” some misconceptions about guns.

Duff explained that “the point I was trying to get across to everybody is these are all semi-automatic firearms and when you pull the trigger once it fires once. They don’t spray bullets everywhere like you see in Hollywood or in the movies or video games.”

Hannity mentioned the 7-bullet-per-clip limit that New York recently passed into law. Duff disagrees with the ruling partly because it outlaws many of the guns she uses in competition. But she also saw a larger problem.

“I don’t understand the ruling behind that, and keep in mind I’m not a politician, I’m not a spokesperson for the NRA. I’m just a law abiding citizen who supports the Second Amendment right and I feel, especially for our law enforcement, I want them to have all the equipment and tools necessary to keep our people safe and by limiting them to seven rounds, in my opinion, that’s not letting them do their job to their full capability.”

Instead of pointing out to his guest that neither New York’s new law, nor any of the proposals made by President Obama, are attempting to limit the weapons capacity for police or other law enforcement, Hannity simply proposed that he and Duff go shooting together sometime.