Hannity Panel Explodes Over 9/11 Million Muslim March: ‘The Audacity is Beyond Words!’ 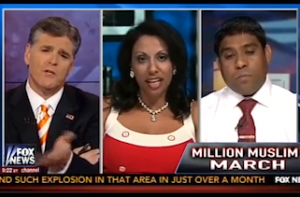 Thursday night on Fox, Sean Hannity tore into the “Million Muslim March” planned for the 12th anniversary of the 9/11 attacks next month in Washington. Hannity welcomed the march’s organizer MD Rabbi Alam on the show to defend his group’s plans, asking him, “You want to turn this into a day about anti-Islamic bigotry?”

“We’re standing this day to show America that we Muslim, we denounce terrorism,” Alam said before Hannity cut him off, saying that sentiment contradicts the statement put out by the group, which claims Muslims continue to be “victimized by being made the villains.”

Anti-Islamic activist Brigitte Gabriel helped Hannity take up the other side of the argument, condemning the group for “crying victim” rather than standing up against terrorism. Instead of saying “we rebuke anybody who blows up civilians in the name of Jihad,” Gabriel said, “they are gathering together and crying victim. The audacity is beyond words!”

When Alam said Muslims have felt “villain-ized and victimized” since 9/11, Hannity shot back, asking, “Hasn’t America bent over backwards to distinguish between Islam and radical Islamists? If anything, I think this country has bent over backwards and then some to make that distinction.”

Gabriel picked up where Hannity left off, saying of Alam, “He’s talking about bigotry. What bigotry? Our president went out of his way to even change the words out of our counterterrorism training manuals to take out every reference to Islamic radicalism, Islamic Jihadism, because we do not want to offend the Muslims. We are the victims here, the Americans. And we are offended that people like them have not yet stood up and condemned radicalism.”