Hannity Panel Gets Heated Over Syria: ‘Either You Go Into a War to Win, or You Don’t Go In!’ 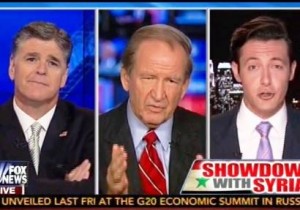 As far as Pat Buchanan‘s concerned, President Obama‘s team has absolutely no idea what it’s doing in Syria. He told Sean Hannity on Monday night that the Obama administration cannot say one day that Assad is like Hitler and then downplay military action against him as “unbelievably small.”

Buchanan pointed out something very wrong with how Kerry has been selling the seriousness of the situation.

Hannah shot back that public opinion was divided before World War II, just like with Syria, and “if we listened to public opinion polls, we’d all be speaking German now.” He fought with Buchanan over the WWII comparison, before Buchanan eventually declared, “Either you go into a war to win, or you don’t go in!”

MH- what about “thoughtful Republicans” like Boehner and Cantor?, history will judge people like Rand Paul “pretty harshly”