Hannity Panel: Why Does Rahm Emanuel Hate Dogs And Women? 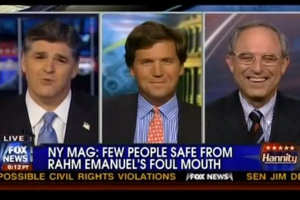 White House Chief of Staff Rahm Emanuel‘s language is legendary for its boldness, and new accounts tell he was not averse to being crude to anyone, from Bill Clinton to Bo Obama. Any discussion of Emanuel’s death threats to the White House dog has comedy potential, but when the people trying to qualify it are Sean Hannity, Tucker Carlson, and Lanny Davis, the humor is practically foolproof.

The new allegations against Emanuel, which Hannity found in New York Magazine, were that he remarked that he wanted to kill the White House dog, called the former president a “f*cking hack-in-chief,” and told a male staffer to “take your f*cking tampon out and tell me what you have to say.” Hannity suggests the comment to the staffer is proof of a liberal double-standard in civility, a point on which Carlson elaborates: “Where are all the feminists? That is clearly a slur against, not just some women, but all women on planet earth. Billions of women ought to be offended by that,” presumably because all women are born with tampons. If you look closely, you can see Carlson suppress a laugh after making that point.

On that note, Hannity shifts the conversation to the President’s use of the term “teabaggers” to describe members of the Tea Party movement, and Davis insists that he is not aware of the lewd alternate meaning of the word, against Hannity’s insistence. The segment ends with Davis commenting, “I can’t believe we’re spending time on this show with two thoughtful conservatives on this topic,” and Carlson objecting to being called “thoughtful.” Really.