Hannity Panelists Clash Over Whether Obama Has Improved U.S. Image: ‘At Least Under Bush We Were Feared’ 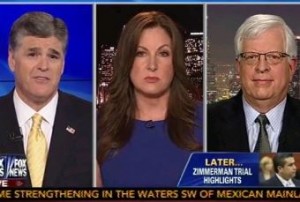 Sean Hannity tonight couldn’t help but use the ongoing saga of Where In The World Is Edward Snowden? to slam President Obama for claiming during his first presidential run that he will restore America’s standing in the world. Hannity said Russia and Hong Kong not helping the U.S. in holding Snowden says a lot about how the world views America under Obama. Dennis Prager agreed, while Leslie Marshall pushed back and argued that the same would have happened with Snowden under a Republican president.

Hannity said right off the top, “I’m glad we know how much our government’s spying on us.” He dismissed the “irrelevant” debate over whether Snowden is a traitor or hero, and wondered how this “kid” got so much access. Marshall immediately went after Snowden, saying that some of the documents he provided were “questionable,” and bashed The Guardian for not acting as most other media outlets did. She claimed to know two individuals with high security clearance who agree that Snowden is “full of malarkey.”

Prager agreed that Snowden is “exaggerating his importance,” but more importantly, he said that Obama believes that “the world will love us” if the United States just stops imposing its will on the rest of the world. Hannity noted how Vladimir Putin seems to have no trouble “sticking his finger in America’s face” by turning a blind eye to Snowden. Marshall shot back that this would have happened under any president from either party. Prager disagreed, insisting “at least under Bush we were feared.”