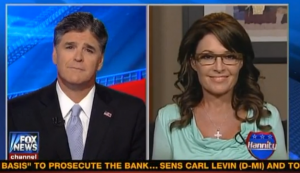 On Thursday night, in light of the controversial new ad by Priorities USA Action, Sean Hannity and Sarah Palin questioned President Barack Obama‘s handling of the situation. Unhappy with his lack of response, they further cited hypocrisy in his calls for civility in politics.

The ad in question featured a steelworker who lost his job after Bain Capital closed the Kansas City GST Steel, causing him and his wife to lose health insurance. Later, his wife was diagnosed with cancer and passed away shortly after. The ad has come under criticism for essentially blaming Mitt Romney for her death.

Hannity called for Obama to denounce the super PAC’s ad, but Palin lamented that “it’s only just begun” — emphasizing, as she has in the past, that the “atrophy of fairness in the media” doesn’t help the situation any.

By law, Hannity said, campaigns are not allowed to have any collaboration with super PACs, but while the Obama campaign insists they knew nothing, the same man, Joe Soptic, was featured in one of their ads a few months ago. And reporters who know the truth won’t do anything, Palin said, because they “prostitute themselves” for access to the Obama administration and campaign.

The two then proceeded to recall Obama’s calls for civility, going on to conclude that while he talks the talk, he doesn’t, in fact, walk the walk. “He is a leader of those unfair and disgusting attacks on people who he happens to politically disagree with,” Palin said.

Replaying an Obama campaign conference call that included Soptic, Hannity posed a series of questions about what Obama knew about the ad and when — and why he won’t condemn it. Palin pointed to the “agenda of deception,” arguing that it’s just how Obama has been running his presidency and his campaign.