Hannity Shouts Down Dem Guest Over Voter ID Laws: ‘Have You No Shame?’
video

Hannity Shouts Down Dem Guest Over Voter ID Laws: ‘Have You No Shame?’ 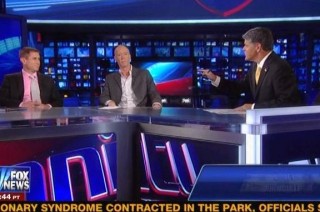 Lots of crosstalk on Thursday night’s edition of Hannity.

The eponymous Fox News host wanted to discuss how he believes liberals have spun the various voter identification laws as “racist” on the part of their Republican backers, and how the Obama campaign has been, in Hannity’s words, “divisive.” Naturally the segment quickly became heated and a fair amount of shouting ensued.

Hannity began the segment asking Democratic strategist Bernard Whitman when he and other Obama supporters “are going to stand up and demand that ‘President Civility’ stop?”

Whitman answered by focusing on the voter ID laws: “You are talking about this most outrageous and widespread attempt since the civil rights –”

“Wait a minute!” Hannity interrupted. “I asked you a different question. I said you have a truth team Obama surrogate accuses Romney of being racist. … million-dollar man [Bill Maher] uses the “c” word for Sarah Palin. Now he uses the race card. Where is your courage?”

When Whitman began to respond by attacking the motivations for the voter ID laws, Hannity interrupted again, shouting, “Do you have any shame? Any? At all? Tell me!”

Whitman continued to talk about how he believes the voter ID law in Pennsylvania is a blatant attempt to disenfranchise minority voters: “The Republican majority leader in Pennsylvania said, ‘Pass this law, it will deliver to the state Romney.'”

“Stop,” Hannity interrupted once more, “answer the question. … To get into the Democratic National Convention, guess what you need? You need identification. So if you need it to get into the DNC, why don’t you accuse them of racism?”

“You are looking to disenfranchise people who are not likely to vote for your candidate,” Whitman responded. “The House leader in Pennsylvania admitted it, why can’t you?”

“You are playing the race card!” Hannity shouted in return.