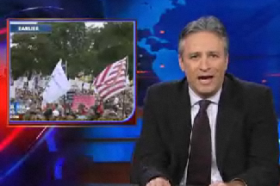 Call it Bachmann Tea-Party Overdrive: Last night Jon Stewart and the Daily Show staff revealed something remarkable: That in his coverage of Michele Bachmann‘s so-called “Superbowl of Freedom” last weekend in D.C., Sean Hannity used footage of Glenn Beck‘s 9/12 event to make the Bachmann rally look bigger. By a factor of thousands.

“If I didn’t know any better I’d think they just put two days together and acted like they didn’t,” said host Jon Stewart, before going on to present video evidence that that was precisely what they did — including Hannity exclaiming over how many people cared enough about freedom to come down to be heard on a Thursday. Er, Saturday. When is the Superbowl again? 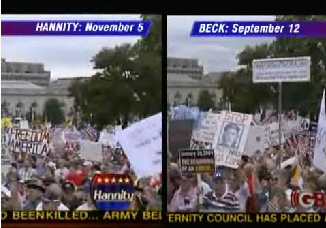 It’s really blatant and remarkable and thank God they were watching, because this sort of misrepresentation is simply not an accident. And, to the point made by the White House about Fox not being a news organization — well, a news organization does not sub footage of a bigger, better attended rally in for footage of a smaller, less attended rally in order to make the latter rally look bigger. That falls under the category of “producer whipping up the crowd for the camera” and for which that producer was “disciplined” for the “mistake” and about which an internal Fox standards email was subsequently sent. As our colleague Zeke Turner put it back then: “When somebody comes to you, as a journalist, for information and allows you to control their field of vision, it’s expected that you’ll turn your lens on the truth. Not an augmented or altered version of the truth.”

This is an augmented and altered version of the truth. One wonders if the rebuke from Fox to the other networks for not adequately covering this huge and momentous occasion would have been next. Watch this footage.

> Update: FNC tells us Hannity will address this on his show tonight. -SK