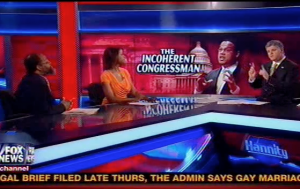 RELATED: Hannity Follows Up On Fiery Ellison Interview: He Was ‘Ranting’ And ‘Incoherent,’ ‘Grasping At Straws’

“The reality is, the Congressman not only associated with these radicals, but he spent years spewing their hateful rhetoric,” Hannity said, alluding to the congressman’s time at the University of Minnesota. While Ellison “publicly admitted” to an 18-month association with the group to work on the Million Man March, Hannity charged that Ellison’s link to Farrakhan goes further. (Criticism of these associations arose during Ellison’s 2006 congressional campaign and he’s previously apologized for them.)

When asked to comment, Hannity said, Ellison “finally responded late tonight with an attack on yours truly.” In a statement, he said, “Americans deserve journalists who provide responsible, objective reporting. Instead, Sean Hannity is bringing up my religion and making personal attacks. This is sad. Can we get back to what’s best for the American people now?”

“What is the difference, I mean — do we have somebody then in Congress that is the equivalent of one side of what the Klan is?” Hannity asked. “Because I view the rabid rantings of Khalid Mohammed as frightening in terms of racism, anti-Semitism.”