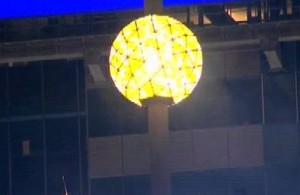 It seems almost impossible that this much time has elapsed, but we have finally reached the year in which we can legitimately start speculating about the 2012 elections is finally here. Goodbye, democratically generous but economically frugal 2011! Hello, somehow-already-tumultuous 2012! Want to join the million or so revelers ringing in the new year in Times Square? The video of the first seconds of the year below.

As always, Times Square was replete with tourists packed into the streets in the comparatively mild winter weather (compared to other years) to sing, dance, provide cable news entertainment fodder and watch the ball drop. As for that ball, here is everything you need to know, via Scientific American:

BIG: The Geodesic sphere is 12 feet in diameter and weighs in at 11, 875 pounds. That is about “the length of an average SUV” and “the weight of four compact cars,” according Lighting Science Group Design Works who did the ball’s most recent makeover in 2008.

BRIGHT: 2,688 Waterford crystal triangles of various sizes, some with intricately carved facets, shapes and motifs with different themes like joy, love and friendship.

MORE COLORFUL THAN EVER: This year’s ball has 32,256 Philips Luxeon LEDs (three times more than last year). Philips Lighting says that its red, green, white and blue LED modules help to create a color palette of over 16 million colors and billions of color patterns.

MORE ENERGY EFFICIENT than last year: According to the Times Square Alliance’s website this year’s ball is “10-20% more energy efficient than last year’s already energy-efficient Ball, consuming only the same amount of energy per hour as it would take to operate two traditional home ovens.”

Watch the ball drop via CNN below:

Watch one of the Times Square performances: Pitbull – Give Me Everything: