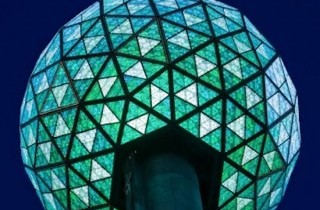 We made it! Despite supposed Mayan prophecies and election-day doomsaying, the already-sort-of-tumultuous 2013 is here, with the very tumultuous 2012 fading quickly in the rearview mirror. Want to join the million or so revelers ringing in the new year in Times Square? The video of the first seconds of the year below.

As always, Times Square was replete with tourists packed into the streets in the comparatively mild winter weather (compared to other years) to sing, dance, provide cable news entertainment fodder and watch the ball drop. As for that ball, here is everything you need to know, via Times Square Alliance:

The Ball is covered with a total of 2,688 Waterford Crystal triangles that vary in size, and range in length from 4 3/4 inches to 5 3/4 inches per side.