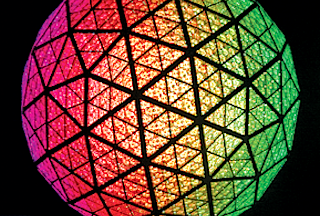 Happy new year! And welcome to 2014. Whether you watched it live and want to experience it again or were just too busy partying, here’s the dramatic ball drop from just minutes in New York City’s Times Square. Here’s to a great, if unusually controversy-filled 2013, and an even better 2014. Thanks for ringing in the new year with Mediaite and we hope to see you here a lot over the next year.

Here’s everything there is to know about this year’s ball, via the Times Square Alliance:

The Ball is covered with a total of 2,688 Waterford Crystal triangles that vary in size, and range in length from 4 ¾ inches to 5 ¾ inches per side.

For Times Square 2014, all 2,688 of the Waterford Crystal triangles introduce the new design Gift of Imagination – featuring a series of intricate wedge cuts that appear to be endless mirrored reflections of each other inspiring our imagination with a kaleidoscope of colorful patterns on the Ball.

The 2,688 Waterford Crystal triangles are bolted to 672 LED modules which are attached to the aluminum frame of the Ball.