Harris-Perry Confronts Akin Adviser: How Could You Join Campaign After Akin’s Rape Comments? 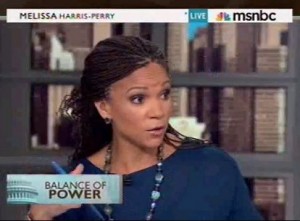 “I go where the fight is,” Tyler replied, before going on to describe Akin’s comment as a misstatement in the grand tradition of politicians like, say, VP Joe Biden, and chastising both Akin’s fellow Republicans and the media for presenting a “gross distortion” of what Akin had meant to say.

Harris-Perry rejected the idea that Akin’s statement had been a mere “slip,” pointing out that — even if we leave aside his talk of a “legitimate” category of rape — Akin had been clear when explaining how he believes women’s bodies function when faced with conception after a rape. The host then offered a clip of Rep. Joe Walsh saying that there is no need to provide exceptions to abortion based on risks to the mother’s life or health, because modern medical technology does away with such risks. If she were working within the Obama campaign, Harris-Perry said, she’d be making sure to try and tie “down ticket” comments about rape, abortion, and women’s health to Romney in the minds of voters.

Panelist Melanie Roussell of the DNC then did just that, pointing out that Romney running mate Paul Ryan co-sponsored legislation with Akin that would seek to redefine rape. NYU’s Cristina Beltran went on to re-introduce rhetoric regarding a Republican “war on women” and Romney’s “binders full of women.”

Tyler brought the conversation back to Akin and his rival, Claire McCaskill, by characterizing her position on abortion as “radical,” saying that she “would like to have abortion up to the senior year of high school,” later saying that, no, she revised this to merely be up to the ninth month of pregnancy.