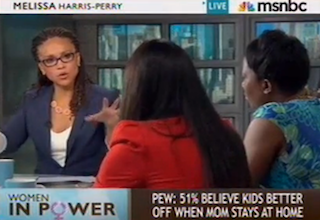 On Saturday morning, Melissa Harris-Perry addressed the new Pew Research study that found women are the primary breadwinners in forty percent of American households. “If this doesn’t sound like a rapture-producing eschatological finding to you, then you haven’t been watching the Fox Business Channel, and their all-man panel,” Perry said, before playing clips of Lou Dobbs and his fellow males fulminating about society’s liberal decline.

There actually are a couple of alarming undercurrents to this, one of which is over the last thirty years men have not been keeping up with economic shifts. You’ve had this job polarization where middle-skill jobs are falling out. We have more high-skill and low-skill jobs. Women have responded to that by greatly increasing their level of educational attainment over the last thirty years. Men haven’t, so they’ve had decreased attachment to the workforce. More of them are working in low-skill jobs. That’s one of the reasons that you have more households with women as primary bread winners. So that I think is in part not a happy story because it’s about men not keeping up. But I think the biological frame that’s been put on it is very odd.

“Even less whether or not men are keeping up, the idea that a household isn’t keeping up,” Perry said. “We now live in a country where to live at a standard that my grandparents may have been able to do on one income, you simply must have two incomes.”

“That’s the most dangerous point,” said panelist Carmen Wong Ulrich. “Now we think dual income is natural and that’s the way we should rule our lives. The problem is it’s actually the most fragile position to be in. If you base your whole household off of two [incomes] and you lose one, that’s a fifty percent pay cut.”

“At the same time, too, there’s also that culture component,” said Grio‘s Joy Reid. “Because of course it is Fox, so it is conservatism. I think my new slogan for the Fox Business Network is ‘Fox Business: Woman, have baby, make sandwich.'”

Reid got to the cruz of the conservative problem with these new numbers:

I believe that what we’re seeing there is a lot of men reacting to the cultural shift of men not being dominant, period. And this idea that underlies conservatism—with the consent of conservative women, which is what is required to make that work—is that you have to give men the dominant role in society, such that women typically stay not as competitors in the workforce. I think that since Roe v. Wade, the idea that women have autonomy over their bodies, the idea that women are going into the workforce not out of necessity but sometimes because they want to, is really threatening to a lot of conservative men who don’t want to compete with women in the workforce, number one, and who definitely don’t want to work for women in the workforce.

“What was disturbing in the Pew study was how much single mothers are making,” said Reshma Saujani, a candidate for New York City Public Advocate. “We should be focused on low-income women, minority women, immigrant women who are still not able to have good paying jobs, and to lift their families forward. And that’s the conversation we should be having.”

“We were talking about the bi-level distribution around the economy in general, and we really saw that in these Pew data,” Perry said. “On the one hand, you do have women with very good education, who are often married, who are working in upper-income jobs, right, $83,000 plus? And they’re working largely because they want to, and they want to work these jobs because they’re fulfilling and well-paid. And then you have these women, single moms, who are working at the $20,000 wage, who very well may may have a preference for staying home and providing for the emotional, nurturing care of their kids. And those are two different so-called choice sets that women are facing.”

“And I’m sure those Republican men are not willing to put the resources in to make sure that they can actually stay home and take care of their kids,” Saujani said.

“Those women should work,” Reid said, “because now there’s that sort of dual mindset among the right, they’re saying that women like the ones you describe, that are lower income, that are working because they have to—well, they need to be responsible. If they want to get public assistance, they need to work for it.”