Harris-Perry Panel: High Black Unemployment Because They Have Few Links To Corporate America 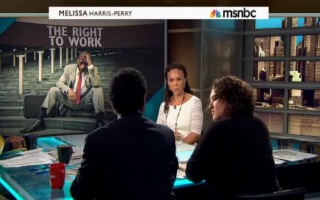 On Saturday, a panel discussing the persistently high unemployment among African-Americans and women on MSNBC’s Melissa Harris-Perry linked that problem to the shrinking public sector. One of host Melissa Harris-Perry‘s guests said that the black middle class was born out of the expansion of public sector employment and that African-Americans simply do not have links to corporate America. “When the white folks get cut from these corporate jobs, we’ve long before been cut from those positions,” said one panel guest.

“Since 2008, 636,000 public sector jobs have disappeared from the economy and it’s a number that could soon be increased by 145,000,” said Harris-Perry. “That’s the number Mitt Romney said he would cut when he vowed to, quote, ‘send them home’ when he became president. You wonder why he got booed at the NAACP convention.”

Harris-Perry asked her panel guests if it was not true that black middle class came about as a result of government employment.

He concluded saying that the black community has never had long ties to corporate America. “That’s not part of our story or our narrative,” Graham concluded.

Activist and writer Shelby Knox added that women, too, find more than the average share of jobs in the public sector and the shrinking of government spending adversely impacts the rate of women in the workforce. Harris-Perry said that this point dovetails with the “war on teachers.”