Harry Reid Attacks Tea Party, Richard Mourdock: ‘People Who Are Willing To Do Nothing But Fight’ 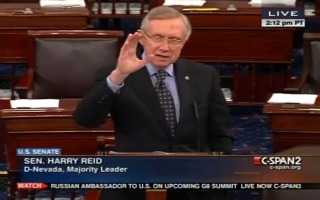 On Thursday, Senate Majority Leader Harry Reid (D-NV) went after the tea party and Indiana State Treasurer Richard Murdock, who recently defeated six-term Sen. Richard Lugar (R-IN) in the state’s Republican primary election. Reid criticized the “far-right, tea party wing of the Senate” and pondered why “everything has to be a fight. Everything.” Reid also attacked Mourdock for campaigning against compromise with Democrats. “Now that’s what we need in the Senate,” said Reid. “More people who are willing to do nothing but fight.”

In a debate over a motion to proceed with a vote to reauthorize the export/import bank of the United States in the Senate, Reid attacked his colleagues for offering amendments which would force a vote rather than simply approve the extension by unanimous consent.

As I indicated in earlier days, the Senate would have passed this bill by unanimous consent, as we’ve done before. But these days, the far-right, tea party wing of the Senate Republican caucus –I used to just talk about the House wing of the tea party, but it’s over here now – who think that everything has to be a fight. Everything. So, were going to have to have a vote on this, rather than do it by unanimous consent.

Reid praised those Democratic Senators who proposed amending the rules of the Senate to reduce the instances of the use of the filibuster rule. “They were right, the rest of us were wrong. Or most of us, anyway,” said Reid. “What a shame.”

Reid went on to criticize the Senate Republican caucus and attacked Mourdock, who only Tuesday became the Republican party of Indiana’s nominee to replace Sen. Lugar.

So, here we are wasting time, because of the Republicans. This week we’ve accomplished a lot Mr. President. We had a vote on a judge and voted on cloture on the Republicans defeating our ability to get something done on student loans. That’s our workload for this week. I know it’s been tough, but Mr. President – and that was sarcastic of course – but this is just absolutely mindless what’s going on. And to top it off, one of the finest members of the Senate we’ve had ever was defeated yesterday by a man, listen to this Mr. President, who campaigned on the platform that there’s too much compromise in the Senate. And he’s going to come back here and not compromise with anybody on anything. Now that’s what we need in the Senate. More people who are willing to do nothing but fight.