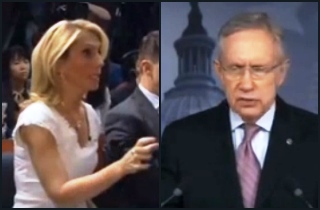 When asked whether Senate Democrats would vote to pass a House Republican proposal to restore funding for the National Institutes of Health, Sen. Majority Leader Harry Reid (D-NV) scolded CNN reporter Dana Bash. In response to her “devil’s advocate” inquiry, the senator suggested the journalist was “irresponsible” and “reckless” for asking whether would put politics over helping “one child who has cancer.”

“You all talked about children with cancer unable to go to clinical trials,” Bash began her question. “The House is presumably going to pass a bill that funds at least the NIH. Given what you’ve said, will you at least pass that? And if not, aren’t you playing the same political games that Republicans are?”

In return, Reid chastised the reporter:

[Editor’s note: The transcript of the exchange was updated to include Sen. Chuck Schumer’s remarks.]