Harry Reid: ‘I’m Not Afraid of the Koch Brothers’
VIDEO

Harry Reid: ‘I’m Not Afraid of the Koch Brothers’ 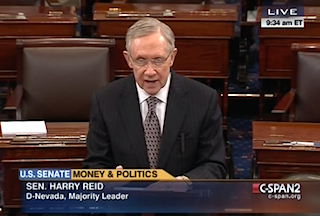 Senate Majority Leader Harry Reid (D-NV) is showing no signs of letting up on the Koch brothers. Two weeks after he took to the floor of the Senate to denounce their Obamacare “horror story” ads for spreading lies and label the Kochs “un-American” for their political activities, Reid was at it again on Thursday morning, making sure everyone knew he’s “not afraid of the Koch brothers.”

Reid began by remarking on the criticism has received from conservatives over the last couple of weeks for “exposing two multi-billionaires… two oil barons, and they’re trying to rig the political system to favor the rich and especially favor themselves.”

Quoting former Senator Patrick Moynihan (D-NY), Reid said, “‘Everyone is entitled to their own opinion, but not to their own facts.’ But I had guessed the Koch brothers had been able to buy their facts over the years, not paying attention to whether they were true or false.”

Reid called their ads targeting Democrats over the Affordable Care Act “misleading at best and out-right false in many instances.” He added, “The Koch brothers are willing to do anything, even exploit Americans suffering from cancer, to advance their campaign of distortion.”

Earlier this week, Washington Post fact checker Glenn Kessler downgraded one prominent anti-Obamacare ad from Americans for Prosperity, which is funded by the Kochs, to three Pinocchios, finding that the leukemia patient featured in the ad would actually benefit from the Affordable Care Act.