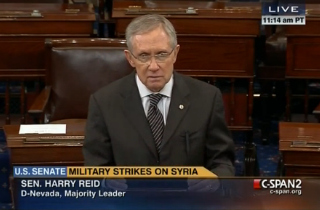 In light of the apocalyptic declarations of those itching to strike Syria, the new adage reads: “It’s always 1938 somewhere.” That latest somewhere is apparently in Sen. Harry Reid‘s mind.

On this Senate floor this afternoon, the Majority Leader urged his colleagues to support striking Syria by likening Bashar al-Assad‘s regime to that of Nazi leader Adolf Hitler; and warning that “isolation” and “neutrality” on the part of the U.S. will lead to destructive outcomes:

“Some prefer isolation. That’s the easy thing to do. But sitting on the sideline isn’t what made the United States of America the greatest nation in the world in years past and, yes, today. And sitting on the sidelines won’t make us a better nation tomorrow. As America faces yet another crisis of conscience, another opportunity to intervene on behalf of humanity, my mind returns to that turning point in the world’s history when the United States faced down an evil regime that murdered millions of innocent citizens. Millions and millions of civilians and prisoners of war were murdered by poison gas in Nazi death camps. Treblinka, Auschwitz. Never again, swore the world. Never again would we permit the use of these poisonous weapons of war.”

He then invoked the United States Holocaust Memorial Museum, located one mile down the road from Capitol Hill:

Reid said intervening to end the Holocaust is similar to responding to the alleged us of chemical weapons by the Syrian regime (which killed approximately 1,400 people):

Watch the remarks below, via C-SPAN2: