Harry Reid Rips John Boehner Over Out Of Control House GOP: ‘I Feel Sorry For The Speaker’
VIDEO

Harry Reid Rips John Boehner Over Out Of Control House GOP: ‘I Feel Sorry For The Speaker’ 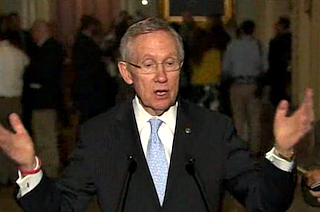 Senate Majority Leader Harry Reid is concern trolling his counterpart in the House. Listing the string of defeats and awkward power plays he says are plaguing John Boehner, Reid concluded by saying, “I guess I feel sorry for the Speaker.”

“Pick an issue,” Reid told reporters during a press conference on Tuesday. “How about the farm bill? Last year’s farm bill, this year’s farm bill. He has dissension in his own ranks. Post office: he’s just letting that go hoping it goes out of everyone’s mind. It hasn’t. We passed it here on a bipartisan basis, he ignored it. Sales tax, online sales: he’s just ignored that. The budget. Let’s got to conference on that!”

“Now immigration,” Reid continued. “He is saying the bipartisan bill that we’ve done, he is not going to touch that. Well, we’re going to continue to press.”

Boehner is widely seen as stuck between a rock and a hard place on immigration, with the GOP establishment urgently demanding immigration reform in the face of hostile demographic shifts and a conservative base rebelling against what they see as amnesty. The split is another iteration of the establishment/base divide that has hindered Boehner’s tenure since he became Speaker in 2010, with the tea party elements of the party often bucking the will of the Speaker.

Reid is hoping to use this impression that the inmates run the asylum in the House as leverage to compel Boehner to bring the immigration bill to a vote.