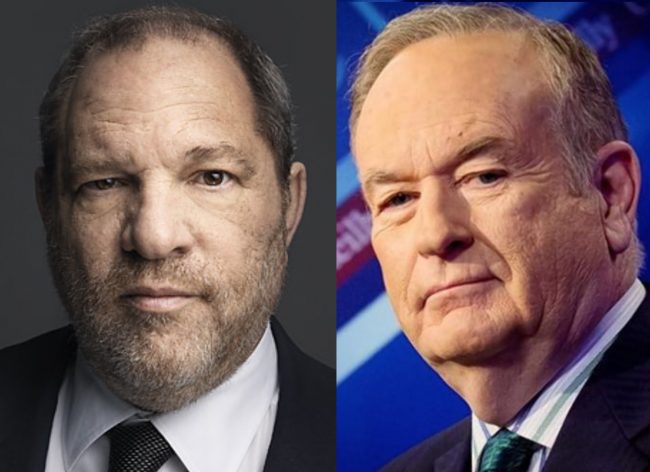 As I have written numerous times before, there is almost no topic that cable news outlets enjoy covering more than the failures of their competitors. Schadenfreude is not something of which anyone should be proud, but it’s become something of a predictable pendulum of coverage, particularly within the broader media battle between Fox News and NBC News.

With multiple allegations of sexual harassment in the air, we seem to be witnessing a long overdue blast of disinfecting sunlight illuminating a culture of toxic work environments in media. Most recently there was the NY Times report of Harvey Weinstein’s settlement payouts to women accusing him of harassment (and worse) that was quickly followed up by Ronan Farrow’s New Yorker profile that was — somehow — even more damning.

As we documented extensively two weeks ago, NBC received a lot of reasonable criticism for the apparent reluctance to cover the Weinstein reports across a number of top NBC news and entertainment properties — not to mention NBC passed on the story when it was initially pitched to them by Farrow. When the news finally did break, SNL initially decided to ignore Weinstein jokes, and it was largely played down on NBC News and MSNBC programs — until of course Rachel Maddow had Farrow on as a guest. There was reasonable suggestion that NBC was underplaying the reports thanks to their coziness with the now disgraced Hollywood movie mogul.

In many ways it was the perfect story for them: an immoral left wing political backer to Clintons and Obama had engaged in morally bankrupted behavior — behavior that appeared to be covered up by a like-minded media cabal, vis-a-vis NBC?! This single story perfectly encapsulated numerous conservative political-cum-conspiratorial narratives. And the usual suspects had a field day!

Tucker Carlson seemed to delight in the story, calling for NBC News President to resign, saying “Noah Oppenheim ought to resign immediately and if he doesn’t, he ought to be fired immediately by NBC’s parent company Comcast. News executives are not allowed to tell lies. They are not allowed to participate in cover-ups. They ought to answer straightforward questions straightforwardly. When they don’t, you know they’re corrupt, and that is exactly what NBC News is.”

Sean Hannity slammed supposed liberal hypocrisy, saying: “I have explained over and over on this show, liberals love to be so sanctimonious,”  “holier-than-thou.” He added: “They are really hypocrites. They claim moral authority over Republicans and conservatives over issues like women’s rights, gay rights, religious freedom.” What he neglected to mention was that he had Bill O’Reilly on as guest on his show just one week prior, with full knowledge of O’Reilly’s previous behavior.

Fox & Friends parroted much of the the same talking points, without any acknowledgment of irony that the show’s hosts were all ostensibly hired by Roger Ailes — a man who was accused of doing much of the same reprehensible behavior they were laying on Weinstein, AND oversaw a work environment that seemed to allow such behavior.

In their salivations over the Weinstein ordeal, the most full-throated Fox News pundits laying into NBC all seem to forget the old adage that “those who live in glass houses should not throw stones.” As a few media critics have pointed out, — namely MSNBC’s Joy Reid — decrying the evils of Hollywood staying quiet about a toxic culture — from the studios of a news network that has it’s own, and possibly much more toxic history — leaves one open to searing criticism.

As viewers of Megyn Kelly’s Today program saw on Monday, there is a sprawling and insidious history of sexual impropriety in the hallowed halls of Fox News. Judging purely by Kelly’s damning litigation of the pass discretions of Ailes and ex-anchor Bill O’Reilly, it appears that, as of now, NBC was treated to the last dose of Schadenfreude. Given the legal implications and personal sensitivities involved in Kelly’s opening essay, NBC News executives were certainly involved in approving her damning comments. And unlike the Harvey Weinstein coverage miscue, they were likely ALL TOO EAGER to sign off on this turn given how brutally Fox News treated them in the past week.

While NBC and Fox News continue to go at it, it’s worth noting that each media is playing by their own set of rules, there is one significant difference in each media outlet.

NBC received deserved derision for their hesitancy to devote full coverage to the Weinstein scandal. They were held accountable, and have since course corrected with voluminous Weinstein coverage of Weinstein’s gut-wrenching  behavior. But while he may have been a business partner with NBC Universal owned properties, he wasn’t an employee. His gross behavior was not within the walls of NBC offices. They were held accountable for the misstep, and have now devoted appropriate coverage to the story.

On the other hand, by most accounts Fox News really did have a toxic environment that was set by it’s founder and CEO Roger Ailes. And the reported settlements with those who accused Bill O’Reilly of harassment (and more) suggests that the problems at Fox News were much deeper than NBC’s bad editorial judgment in how to cover Weinstein.

If NBC News reporters and hosts appear to be hiding a grin in their coverage of the millions of dollars in Fox News settlements, it is almost certainly because they are delighting in the old “revenge is a dish best served cold” idiom. And since FNC hosts couldn’t restrain themselves in pointing and laughing at NBC’s journalistic miscues, at least NBC News wasn’t a toxic work environment, which is certain to bea story that MSNBC is sure to cover much more relentlessly than Weinstein.