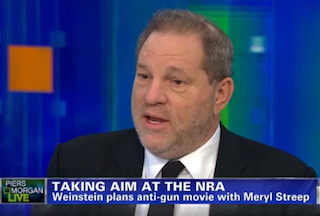 Producer Harvey Weinstein caused a major uproar amongst gun rights activists this week when he told Howard Stern that he has plans to make a movie that will make the NRA “wish they weren’t alive after I’m done with them.” In an interview with Piers Morgan set to air Friday night on CNN, Weinstein revealed more details of the film and addressed the charges of “hypocrisy” from the right.

Morgan tweeted details from the interview Friday afternoon, revealing the “bombshell” that Weinstein, who has produced movies like Quentin Tarantino’s Pulp Fiction and the Kill Bill series is now saying he “won’t make any more movies glamorizing guns.”

The CNN host also shared the information that Meryl Streep will star in Weinstein’s film as a senator (presumably Democratic) who “takes on the NRA.”

MORE > Harvey Weinstein told me Meryl Streep will play a Senator who takes on the @NRA in his new anti-gun movie. CNN 9pmET.

For all the “pro-gun” people who are mad at him, Weinstein wanted to make sure they don’t direct their anger at Streep, who he said it just an “actress” attached to the project. “It’s not her belief, and all the heat should come my way,” he said.

UPDATE (6:05pm ET): In another video preview of tonight’s interview, Harvey Weinstein elaborated on his decision to stop making films that “glamorize” violence. “Well, I think they have a point,” he said to people who accuse him of hypocrisy. “You have to look in the mirror too. I have to choose films that aren’t violent or aren’t as violent as they used to be.”