Has Anyone Told Ben Carson That the Republican Primaries Are Over, and Donald Trump Won?
Opinion
VIDEO

Has Anyone Told Ben Carson That the Republican Primaries Are Over, and Donald Trump Won? 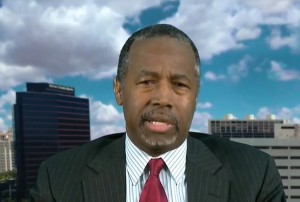 It wasn’t that long ago that retired neurosurgeon Ben Carson was a reliable and endless source of bonkers sound bites, but since ending his presidential run, Carson has been much less visible as a Donald Trump surrogate. Wednesday morning’s Morning Joe represented something of a return to form for Carson, though, as he gave a characteristically perplexing answer to a question about the current general election campaign.

Former Sarah Palin valet and current MSNBC analyst Nicolle Wallace asked Carson if he’d had any conversations with Trump about being more civil in his quest for the presidency, and Carson responded that he sort of is:

Wallace: I wonder if you were having conversations about adopting a more civilized tone, more civility on the campaign trail?

Carson: I don’t want to get into contents of private conversations, but I will say that he is tacting more to issues at this point and less about personalities, at least in terms of the other Republicans.

That’s right, folks, Ben Carson is congratulating Trump for being more civil toward “the other Republicans” in the race, the last of whom dropped out two months ago. Carson has the situational awareness of Rip Van Winkle on an Ambien bender.

Speaking of awareness, though, Wallace and host Joe Scarborough could also use a pot of strong coffee to help them wake up out of the dream state that had them congratulating Ben Carson for remaining civil even as Donald Trump (gasp!) questioned his faith the way he’s now questioning Hillary Clinton’s faith. Carson was actually the first Republican in the race to question another candidate’s faith, a guy you might have heard of named Donald Trump.