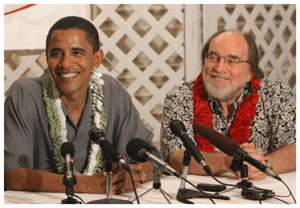 Hawaii Governor Neil Abercrombie is going to finally put to rest the Birther debate (“Rest?” I thought that thing was already in a coma). In an exclusive interview with CNN’s Ed Henry, Abercrombie explained that he will try his best to publicly release the birth certificate. The strangest thing is that he plans on doing that even if the White House doesn’t want him to for fear of even bringing the dead argument back up. Why? Because Abercrombie has long been friends with President Obama’s parents and he’s sick of them being disrespected.

When Henry asked him about Obama’s privacy rights, this is how he responded:

While I’m all for shutting down any more silly Bither debating, there seems to be a weird mixed message about loving the President and respecting his office while disregarding his wishes. When asked what he’d respond to people who said he may be hurting Obama by putting this all back in the headlines, Abercrombie responded that it it was “a matter of principle.”

Check out the interview from CNN below: