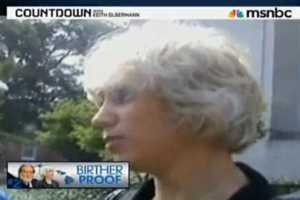 It’s the most wonderful time of the year–a time for sledding, hot cocoa, and very little hot news tidbits. So when Hawaiian governor Neil Abercrombie rekindled the dying embers of the birther fire today, the media leapt up like starved piranhas to nip at the scrap. Would a final investigation bury the birther debate once and for all? Would it discover that the birth certificate that was never actually existed? And, just as importantly, what would Orly Taitz, D.D.S., Esq. have to say?

Tonight’s Countdown, guest hosted by Sam Seder, dedicated a segment to “President Obama’s Muslim roots,” but before that faux-feature, Seder sat down with Slate‘s Dave Weigel for a crash course on birthers and why Gov. Abercrombie’s new war on birtherism would likely do little than rekindle interest in the investigation. “They have not yet to be satisfied by anything,” Weigel told Seder, somewhat deflated. “You’re never going to convince these people that it didn’t happen.”

He noted that it was the initial release of the short-form birth certificate that started “birtherism,” so the uncovering of yet another document would probably not help. What’s more, he added, an official investigation into the matter that proves them wrong is often the precisely wrong way to go to quell conspiracy theories, citing the Warren Commission report’s complete inability to convince JFK conspiracy theorists that the government was uninvolved in that incident.

And as for Taitz’s involvement? She has stated that, should she be allowed to investigate the matter privately, she would stop upon finding satisfactory documents, so the odds of her campaign ending if Abercrombie publicly releases the appropriate documents are slim, assuming her campaign is still ongoing, as she really hasn’t made news since the last time there was no news, sometime in June.

The segment from tonight’s Countdown via MSNBC below: