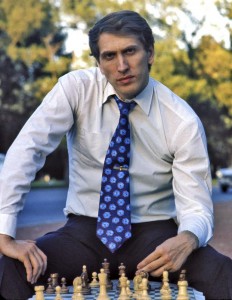 Director Liz Garbus‘ new film Bobby Fischer Against The World (premiering tonight at 9pm EDT on HBO) is a documentary about chess. If that sounds like a tough sell, try being in the meeting where you pitch Rocky IV meets Heart of Darkness on a chess board in the seventies. While the film is an engrossing, suspenseful look at Bobby Fischer and his iconic match with Russian champ Boris Spassky, the film also explores a media backdrop as quaint and alien as a bed & breakfast on Tatooine.

Bobby Fischer, in case you didn’t know, was the most feared chess player since Chewbacca the Wookie (“Let the Wookie win!”), and his pursuit of Russian World Chess Champion Boris Spassky, against the backdrop of a still-roiling Cold War, became the sort of media sensation that’s tough to put into modern terms. There’s a laugh line from the film in which a news anchor runs down a list of history-making news stories like the Watergate investigation, then says, “But first, Bobby Fischer…”

This is in the context of a media world that featured three channels, and only a couple of hours of news time to fill each day, not the gaping 24-hour maw of today, where there’s a new lead story every time you change the channel. Garbus tells Mediaite, “I so wanted to call the movie that, ‘But First, Bobby Fischer,’ but it would have taken a little too long for the viewer to get to appreciate what that was all about.”

“It could never happen today because Bobby Fischer meant what he meant because of the Cold War,” she says. “There was no internet then, but Bobby Fischer was a celebrity who was sought after and scrutinized in a way that became too much for him, but if it happened today, it would be an entirely different story.”

I asked Garbus if she could think of a modern-day equivalent to Fischer’s celebrity at its height, like a Sarah Palin or a Justin Bieber. “Well, It’s hard to imagine what it meant, because it wasn’t just celebrity, it was also celebrity with this total cultural-historical importance.” 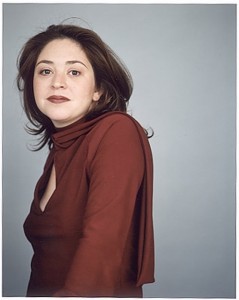 “I mean, everybody wanted (Fischer) to win,” she continues, “but you can’t say that about Sarah Palin, she divides people. I don’t know if you could even use Tiger Woods, because he was a champion that changed his sport, but he also didn’t have the same historical-political context.”

The film took over two years to produce, but Grbus says that’s not unusual, especially for a film with this much archival material. “We’re using film and photographs that have never been seen before.”

She uses the material to terrific effect, crafting a narrative that grips and propels the viewer from the very first frame, and the archival interviews with the enigmatic Fischer gives the film its pained, impenetrable heart. The suspense that builds around the Fischer-Spassky match, and whether Fischer will even show up, is damn near as exciting as the match itself.

Garbus illustrates the import of the match through news footage that shows American news anchors fishing for scraps over scratchy trans-continental telephone hookups, and throngs of Americans gathered around televisions in front of department stores, a stark contrast from the fragmented American attention span of today.

The match also features the kinds of eccentricities that even Charlie Sheen couldn’t make up, with Spassky accusing Fischer of everything but Jedi mind trickery, and Fischer making demands that ended up with the match being moved to a closed room, with only closed-circuit TV cameras. If you don’t know the outcome of the match, I won’t ruin it for you, but even knowing the broad result, the ending is somewhat mind-blowing.

Aside from being a thoroughly absorbing transportation back to another age, Bobby Fischer Against The World also manages to close the gulf between the beloved figure that he was during his time, and the troubling aspects of his later years. Through the benefit of hindsight, and Garbus’ lens, we see the end of Fischer in the beginning, in all of those early interviews, the machinery of madness set in motion by his obsessive genius for the game. There is an argument to be made that the sane genius is the one who can contain his potential, rather than realize it.

Watch a clip of the movie airing tonight, below: