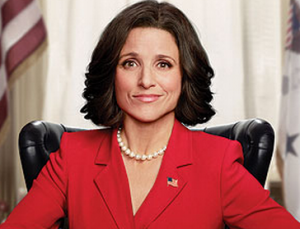 I’ll be recapping the remainder of the first season of Veep on HBO. The show is the brainchild of Armando Ianucci, whose BBC show The Thick Of It provided the launchpad for his foray into American television (one that began with an ill-advised adaptation of The Thick Of It for network television. Both shows feature a gaffe-prone protagonist occupying a governmental office, and follow his/her staff’s attempts to deal with the constant stream of self-sabotage.

RELATED: No, Julia Louis-Dreyfus’ Character In Veep Is Definitely Not Based On Sarah Palin

Well, Veep confirms all our worst fears about politics: no one is in it for the American people, everyone is preoccupied with their own image, and passing legislation and effecting change is constantly placed on the back burner, when it’s considered at all. This is certainly characteristic of the fictional administration on the show, headed up by a shadowy President whom we never see (and who never calls), and co-helmed by Selina Meyers, played by Julia Louis-Dreyfuss. Meyers is a typical career politician, who has been in Washington for decades and is deeply committed to staying there. Whether or not any of her causes are advanced seems to depend completely on their intersection with her ability to remain in power, and she’s often not able to focus on them at all. Day to day, most of her time is spent getting herself into hot water, whether it’s repeating a “hoisted by our own retard” joke to the wrong crowd or referring to a Chinese American governor as “not a real American,” and her staff is also preoccupied with doing damage control. It’s a depressing view of American politics as petty, vengeful, indifferent to the needs of the people, and astonishingly small.

It’s also hilarious. The spareness of the show’s setup — the absence of a laugh track, or music, or lots of transitions between scenes — means that every singularly awful or misguided thing that Meyers says hangs in the air, settling horribly into everyone’s brains. In the most recent episode, the Clean Jobs bill, which Meyers had been laboring over for years, was dropped unceremoniously by the President in favor of focusing on other legislation. Meyers and her team missed this development because it was only covered in the form of chatter on political blogs using one of Meyers’s nicknames — Mrs. DoubtMeyer — and she had asked her team to stop searching for news containing any nicknames, since she was depressed that they were so plentiful and so cruel. This is the kind of thing that Meyers specializes in: becoming obsessed with an issue’s personal implications for her to the point that she gets screwed in a different and more damaging way. She is the personification of not being able to see the forest for the trees.

Her staff, which has to placate her and perform damage control constantly, is made up of several identically foul-mouthed foot soldiers. The VP’s right hand woman, Amy, has to massage her ego, round up support for legislative initiatives, and head Meyers’s many gaffes off at the pass. Her head of communications has to try to make her look good, often resorting to desperate measures (in an earlier episode, after an unfortunate joke, he tried to ameliorate the situation by suggesting that maybe the joke would be bumped out of the news cycle if Tom Hanks died). Her secretary, Sue, serves as a hyper-competent buffer between Selina and the rest of the world. Her communications director has a deputy, Dan, who has already shown himself to be the most craven of the lot — and generally very successful — and Arrested Development’s Tony Hale rounds out the cast as an obsequious lackey who knows to bring Meyers ice cream she didn’t even know she wanted.

It’s such a welcome departure from the hyper-competent portrayal of government officials in pop culture, and the show’s approach is refreshing. Essentially, Ianucci is throwing up his hands and admitting that our government is broken and we’re all on the path to disaster, but he does it with tight writing, good performances, and perhaps the most schadenfreude that it is possible to experience in one half hour. I’m certainly looking forward to the rest of the season. You can see a clip from the latest episode, “Nicknames,” below via HBO: