‘He Really Grabbed My Butt’: Latest Accuser Claims She Was Groped By Trump In 2006 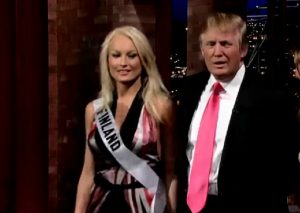 With only twelve days left until Election Day, another woman has come forward to claim Republican presidential nominee Donald Trump made unwanted sexual advances towards her in the past.

Ninni Laaksonen told a local newspaper in her home country of Finland that the real estate mogul grabbed her rear-end prior to a taping of Late Show with David Letterman in 2006.

Laaksonen had been crowned Miss Finland that year and was accompanying Trump, along with three other contestants, to the taping when he allegedly accosted her.

Contacted by local newspaper Ilta-Sanomat, which rang all women known to have met Mr Trump, she accused the billionaire of grabbing her bottom in New York in July the same year.

Miss Laaksonen said the incident occurred moments before she appeared on the Late Show with David Letterman with three other contestants and Mr Trump.

“Before the show we were photographed outside the building,” she told the paper.

She also stated that she attended some parties at Trump’s home and was told that the he really liked her because she reminded him of a younger version of his wife Melania.

Per most counts, this would make Laaksonen the twelfth woman to come forward and accuse Trump of sexual misconduct since the second presidential debate, when Trump told moderator Anderson Cooper that he had never assaulted women in the way he described in the infamous Access Hollywood tape.

Watch the David Letterman interview of Trump above, which features Laaksonen.