‘He Was Bleeding From Wherever’: The View Applauds Megyn Kelly’s Gingrich Interview 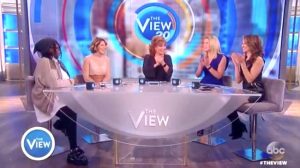 The View took a look at last night’s huge fight between Megyn Kelly and Newt Gingrich, and the ladies gave the Fox host major props for raking the former House Speaker across the coals.

The meltdown occurred Tuesday night, when Gingrich accused Kelly of being “fascinated with sex” because she brought up Donald Trump‘s sexual abuse accusers and his low polling numbers with women. On today’s show, the panel unanimously agreed that Kelly came out as the stronger presence by staying on topic and not getting rattled by Gingrich’s barrage.

As Joy Behar brought up how often Trump and his supporters go off-message by getting riled up, she appeared to reference the infamous remark that solidified the Trump campaign’s first war against Kelly.

"She is tough on everyone," @JedediahBila says of the way Megyn Kelly retorted to what Newt Gingrich said about her. https://t.co/FbpmN7EE2Q

“Megyn got him. He was bleeding from wherever,” Behar said. “She nailed him – I don’t want to say to the cross because that’s not nice – but she nailed him.”

Jedediah Bila eventually got in the action, taking issue with how Gingrich expressed that Kelly is guilty of media bias. A former Fox personality herself, Bila said that Kelly is “tough on everyone” because “she’s actually one of the people in this business who does her job.”

Trump’s supporters have already started blasting Kelly over the interview.