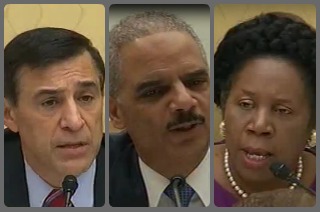 On Wednesday, a hearing on Capitol Hill exploded as Rep. Darrell Issa (R-CA) accused Attorney General Eric Holder’s Department of Justice of dropping a case against the city of St. Paul, MN, in 2011, in exchange for the city dropping a civil rights case that was heading to the Supreme Court. A.G. Holder and Rep. Sheila Jackson-Lee (D-TX) blew up over the charge, and went after Issa for both his methods and his manner of questioning. Holder attacked Issa after he was accused of intentionally withholding information, saying Issa’s conduct was “unacceptable” and “shameful.”

Issa began by playing audio of Assistant Attorney General for Civil Rights Thomas Perez, also President Barack Obama’s nominee to become the next Secretary of Labor, in which he confirms that he is arranging for details relating to the St. Paul case not to be disclosed.

“Do you think it’s appropriate for someone to – at a federal level – to try to keep information out in order to disguise what’s actually going on?” Issa asked.

Holder said that he was not aware of all of the details of the case. “There are a whole variety of reasons why people, why we as a government and Justice Department, decide not to become involved in qui tam cases,” Holder replied.

“I’ll take that as a yes,” Issa interjected.

“That was not a yes,” Holder shot back.

Holder and Issa went back and forth over whether the DoJ’s decision not to pursue the case did or did not end the civil rights case entirely. Holder disputed Issa’s characterization that the Supreme Court was denied the chance to hear that civil rights case, strongly adding that Issa’s mischaracterization was something that he would “typically” do.

Jackson-Lee interjected at this point, calling for a parliamentary inquiry. She asked if there was notice given to Holder to hear a recording of Perez played. She was repeatedly asked to suspend, by the committee chairman, who then replied that there is no rule prohibiting audio evidence.

The congressional committee members battled over Jackson-Lee’s point of order request. She insisted that Perez’s audio could not be authenticated. “That is not a parliamentary inquiry, nor is it an appropriate point of order,” insisted Chairman Rep. Bob Goodlatte (R-VA).

Issa and Holder blew up at each other when the congressman insisted that the attorney general was intentionally withholding details from members of Congress.

“That’s what you typically do,” Holder shot back. “That is inappropriate, and it is too consistent with the way in which conduct yourself as a member of Congress.”

Watch this exchange below via C-SPAN 3: