Heart, Warmed: Family Receives Stray Puppy Held By Their Son The Night Before His Death In Iraq 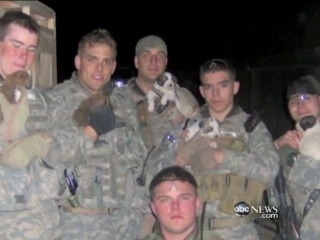 Fun fact about me: I am a sap. I cry over that Christmas Folgers commercial where the brother returns from working in Africa and his sister puts a ribbon on him and says “you’re my present.” I cry at weddings. I cry when eating Popeye’s biscuits because they’re so good, how could anything be so good? I’m crying right now because I started thinking about that Folgers commercial again.

And I cry over dog stories. Like this one.

The night before he was killed by a roadside bomb in Iraq, Army Specialist Justin Rollins and his buddies discovered a litter of puppies, posing for pictures with them because, aw, puppies. Here, finally, is something sweet and innocent and good to hold onto amid this hellish nightmarescape those young men found themselves in.

After his funeral, Rollins’ family members were asked whether there was anything that could be done to help them as they grieved. “Maybe,” they thought, “you could get us one of the puppies that Justin held.” The Army’s response was something along the lines of a nervous “Um. Haha.” and the family was told there was a one-in-a-million chance of locating the litter.

But, because we live in a wondrous, beautiful world of miracles and Popeye’s biscuits, everyone from local politicians to Congressional leaders joined in the effort to locate those stray pups over in Iraq. And, less than three months after Rollin’s death, a little freckled dog named “Hero” was brought over to the U.S.

And, because of course, a beautiful ray of sunlight beamed down directly on Hero as ABC News was filmed its segment about him. Which, fine, you know, yes. Made me tear up just the tiniest bit. Sappity sap sap.

Have a look at ABC News’ “Person of the Week” segment on Hero and Justin. Here’s a tissue: