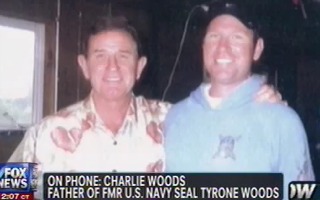 Chris Woods, father of Navy SEAL Tyrone Woods who was slain on September 11 in the attack on an American consulate in Benghazi, joined Fox News Channel’s Megyn Kelly on Friday where he gave a heartbreaking interview about the death of his son. While Woods repeatedly said that he harbors no ill-will towards the members of President Barack Obama‘s administration, he was clear that he views the administration’s excuses as untruths. Woods accused those who refused CIA requests for security of being guilty of the murder of his son.

An exclusive report from Fox News today revealed that Tyrone Woods and other CIA operators had requested immediate support as the attack on Benghazi was ongoing, but they were told to “stand down.”

Former Navy SEAL Tyrone Woods was part of a small team who was at the CIA annex about a mile from the U.S. consulate where Ambassador Chris Stevens and his team came under attack. When he and others heard the shots fired, they informed their higher-ups at the annex to tell them what they were hearing and requested permission to go to the consulate and help out. They were told to “stand down,” according to sources familiar with the exchange. Soon after, they were again told to “stand down.”

“This is not about politics – if it were about politics, it would dishonor my son’s death – this has to do with honor, integrity and justice,” Woods said to Kelly.

Kelly asked how Woods felt learning that his son requested backup on multiple occasions as the attack was ongoing, but that support was denied. Woods said that his son disobeyed the order to stand down because it was in his nature to be courageous.

“If, in fact, those people in the White House were as courageous and had the moral strength that my son Ty had, immediately – within minutes of when they found there was a first attack – they would have given permission, not denied permission, for those C-130s to go up there,” said Woods.

“Those people who made the decision, and knew about the decision and lied about it, are the murderers of my son,” Woods added.

Kelly asked if he felt like the Obama administration was being straightforward about the events in Libya on September 11. “This is all a pack of lies,” Woods said flatly. “And that’s one thing, as a father whose son was murdered, I do not appreciate lies.”

Earlier on Friday, Woods joined Glenn Beck where he said that the members of his administration who attempted to console him “had no remorse.” He said that Vice President Joe Biden asked him, “did your son always have balls the size of cue balls?” Woods said that Sec. Hillary Clinton promised that the United States would “make sure that the person who made that film is arrested and prosecuted.” There has been no independent confirmation of these claims.