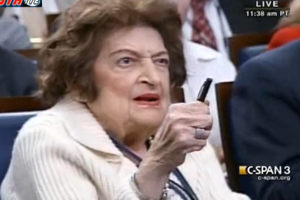 Since yesterday’s Israeli military attack on a flotilla heading to Gaza, the White House has been walking a tightrope trying to keep their comments about it as neutral as possible. Even their neutrality, however, was questioned today by none other than Helen Thomas, who put Press Secretary Robert Gibbs in a tough spot by railing against the Obama administration for not calling the event a “deliberate massacre” and more concretely confronting the Israeli government.

Thomas, clearly fuming, gave Gibbs a bit of a lesson in Loaded Questions 101:

“The initial reaction to the flotilla massacre, deliberate massacre, an international crime, was pitiful. What do you mean you regret something that should be so strongly condemned, and if any other nation in the world had done it, we would have been up in arms? What is this ironclad relationship where a country that deliberately kills people and boycotts every aid and abet… the boycott?”

Gibbs tried to interrupt the incensed Thomas a couple of times, but finally let her finish the question before answering that he believed the White House response initially regretting the loss of life without taking a stand on either side was appropriate, since they want to have a complete set of information before condemning anyone in such a delicate incident. “Nothing can bring them back,” Gibbs responded, referring to the victims, but he said the administration believes “that a credible and transparent investigation has to look into the facts, and as I said earlier, we are open to international participation in that investigation.”

Video from the White House briefing below: