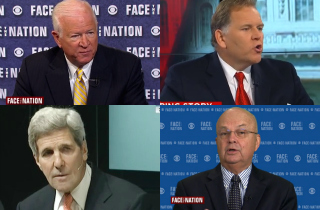 Its graphic detail of both the CIA’s techniques and the culture surrounding them sure explains why so many, especially those implicated in the report, cried so loudly for the report to be junked. A rabble of ex-CIA officials, former Bush administration figures, and national security hawks took to various media outlets in the past few days to warn that the report could do everything from sucker punch the CIA to cause American deaths.

The Chair of the House Intelligence Committee has long been against the revelation of U.S. techniques, be it the NSA’s surveillance or the CIA’s interrogation. That didn’t change with this report.

Ranking member of the Senate Select Committee on Intelligence Saxby Chambliss voted against the report at its inception, and disputed whether it would even reveal torture at all.

“This report is not something that’s going to do anybody any good,” Chambliss said. “It’s a chapter that we had closed, and I regret reopening the chapter.”

Chambliss was also the primary author of the Senate minority’s response to the report. Watch the video below, via WaPo:

Calling the report “political,” he told Newsmax, “The current administration has gone to court to prevent the release of the photos of the dead body of Osama bin Laden, and yet we’re going to put these very graphic descriptions of enhanced interrogation techniques out there and someone thinks that won’t have an impact? That’s really hard to imagine.”

In addition to reiterating the claim that the report will endanger lives, Hayden said it would enervate the CIA. “First of all, the CIA workforce will feel as if it has been tried and convicted in absentia since the Senate Democrats and their staff didn’t talk to anyone actively involved in the program,” he told Face the Nation. Watch the video below, via CBS News:

The Secretary of State called Senator Dianne Feinstein (D-CA), who oversaw the report, to delay (but not junk) the report, fearing the timing could inflame anti-American sentiment.

“What he raised was timing of report release, because a lot is going on in the world — including parts of the world particularly implicated — and wanting to make sure foreign policy implications were being appropriately factored into timing,” an administration official said to Bloomberg Politics. “He had a responsibility to do so because this isn’t just an intel issue — it’s a foreign policy issue.”

Former Bush administration official Nicolle Wallace got two rounds Tuesday morning to try to shove the report back in the box, at one point telling Senator Angus King (I-ME) that he was endangering lives just by talking about it on-air:

She later led a master class in deflection on torture on Morning Joe. Via MSNBC:

Heritage Foundation national security fellow Peter Brookes hasn’t read the report, but that didn’t stop him from wanting to keep everybody else from doing so.

“I haven’t seen the report, but from what I hear from people that may have read the report… I think it’s dangerous [to release it],” Brookes told Fox Business. “We’re at war here.”

“I don’t see what value it adds,” he continued. “For oversight purposes, I understand. Congress needs to work on its relationship with the CIA. But the public release of this, I just don’t see any value in it.” Watch the video below, via Fox Business: