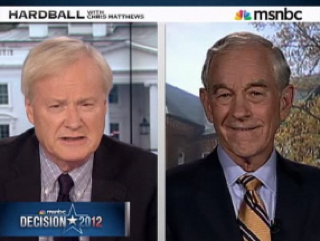 Firebrand Rep. Ron Paul didn’t make it through the day of his official 2012 presidential campaign launch without falling into the libertarian quagmire that is the Civil Rights Act of 1964. Making his debut as an official Republican candidate on Hardball yesterday, Chris Matthews asked Rep. Paul to explain why he wouldn’t vote for the Civil Rights Act. What ensued was a heated exchange culminating with Rep. Paul objecting to Matthews’ alleged claim that “liberty is disgusting.”

Matthews was determined to make this debate explicitly about personal liberties, only mentioning foreign policy at the end of the segment and exclaiming that he “loved” Rep. Paul’s positions on those. But the bulk of the conversation centered on two very different topics– half the time was spent on Rep. Paul’s recent comments that heroin should be legalized and the other half on the Civil Rights Act. “It’s a sticking point about how far you go with your libertarianism,” Matthews argued, giving the Congressman space to discuss the matter. “I think under the right circumstances we should legalize freedom, and that is part of it,” Rep. Paul explained. “As long as people don’t force things on other people, I don’t feel threatened by it.” He also added that, given that “we don’t throw alcoholics in prison,” he didn’t see the rationale for doing the same to addicts of other drugs. Matthews didn’t really buy it and changed the subject, adding somewhat dismissively that “most of us young people were enraptured by [libertarianism] as kids,” but that, to him “the idea of total freedom doesn’t seem to work.”

To prove his point, Matthews brought up the Civil Rights Act, to which Rep. Paul responded that he believed “property rights should be protected,” and that “it’s off the wall when you say ‘I’m for property rights and states’ rights and therefore I’m a racist.'” If this exchange sounds familiar, it’s because his son, Sen. Rand Paul, made very similar comments on Rachel Maddow while he was campaigning last year, making yesterday’s exchange with Matthews all the more bizarre. Matthews objected that he wasn’t saying “anybody is a racist,” but repeated that he believed there was something wrong with allowing business owners to not serve a customer based on race. The heated exchange via MSNBC below:


Thus Rep. Paul’s two biggest contributions to the 2012 campaign season so far have been a staunch defense of heroin and a repudiation of the 1964 Civil Rights Act. “That Ron Paul sure has his finger on the pulse of America!” many Republican strategist must be scoffing, with some libertarians wondering if there is any candidate on their side that will be able to escape the specter of this otherwise completely uncontroversial bit of legislation. But in a campaign season where the President’s birth certificate somehow became a primordial campaign issue, are the economic restrictions of a Johnson-era law or the War on Drugs any more ridiculous a topic? Similarly, Rep. Paul is entering a race where the frontrunners in the polls are either not officially running, completely preposterous, or both.

Matthews and big government types like him love to brandish the “Civil Rights Act card” at libertarians as if to prove that the entire philosophy is untenable, and certainly with as staunch a libertarian as Rep. Paul, the issue becomes severely problematic. Doubting that legislation that permanently changed the social psyche of America in such a positive way is a blemish on either Paul’s record. But it is difficult to believe that there is a contingent of Republican primary voters out there that would vote for either the younger or elder Paul based on their mostly philosophical pseudo-objection to a universally accepted law from half a century ago. Similarly, it’s difficult to believe that President Paul would have any time to waste passing executive orders to repeal the Civil Rights Act instead of recalling troops all over the world or ending the Federal Reserve– both of which would do far more to potentially negatively impact the daily lives of Americans, and both of which merit far more criticism than this seemingly arbitrary non-topic.

Take a look, for example, at Rep. Paul’s appearance on the same day on the most ideologically distant program from Hardball possible: Fox Business’ Freedom Watch. When given free reign to pick the issues he talks about, Rep. Paul still makes statements that, to many on either side of the political spectrum, are absurd– his isolationist foreign policy sticks out in particular. And this, while far less polarizing than believing racism is a constitutional right, should still raise all sorts of far more legitimate red flags than philosophical beliefs no president would have time to implement.