Here We Go Again: Donald Trump Tells Greta He Is ‘Not A Major Believer’ In Obama’s Birth Certificate 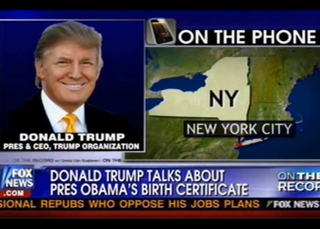 A long, long time ago, in early 2011, reality TV star and real estate personality Donald Trump comically became a frontrunner in Republican primary polls after questioning whether President Barack Obama was born in the United States. Well, despite the President releasing a long-form birth certificate that should have ended the discussion, Trump revealed tonight to Greta Van Susteren that he’s just not convinced. Maybe those investigators in Hawaii found something new?

The long-dead issue of the President’s birth certificate resurfaced today with Texas governor Rick Perry, who joked that the birther talk was “fun,” because it irritated the President. On On the Record tonight, Trump corroborated the new questions surfacing, stating, “I’m not a believer, I don’t know how it miraculously appeared.” Insisting that he really, really “didn’t want to talk about that,” he continued to say he was “not a fan” of the birth certificate in the form it appeared.

Van Susteren then asked why he had stopped talking about it, and why he had more of less said he was done with the issue, and taken full credit for it being a closed case. “It was never put to rest,” he clarified, “I’m at a point where I said, ‘the country is going to Hell in a handbasket, and we shouldn’t be talking about the birth certificate.” The fact that it “suddenly appears” when he wants it, Trump explained, made him very suspicious. “I’m just not as easily convinced.”

Seth Meyers, ball is in your court.