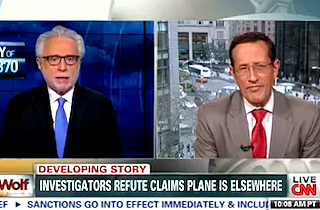 CNN made it six minutes into their 1 p.m. news hour Tuesday afternoon before turning to flight MH 370 — not bad for a network with a two-pack-a-day habit — but that was all it could muster: for the following fourteen minutes CNN breathlessly covered the latest in the search, which today meant refuting the report they broke yesterday that the plane could be “elsewhere.” Sample chyron: “Investigators refute claims plane is elsewhere.”

For contrast’s sake, here’s everything Al Jazeera America covered in that fourteen-minute span:

Note that AJAM managed to fit in an entire commercial break and still beat CNN’s story total 5:1. Even if you’re generous and knock off the segment on Sterling (which was how CNN spent its first six minutes), you’re still left with a 4:1 ratio.

This is part of Mediaite’s recurring segment, “Look at all the stuff Al Jazeera can cover while CNN blathers on about a missing plane.”

Watch the first half of Al Jazeera’s coverage below: