Here’s Everything Steve Doocy Got Wrong About Obamacare This Morning 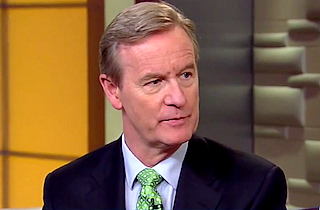 Now that Obamacare is, in Chris Wallace’s generous phrasing this past Sunday, “not an unmitigated disaster,” attention is turning to how conservatives will deal with the cognitive dissonance of a law they swore would collapse functioning about according to plan. While lawmakers are stepping slowly back from repeal rhetoric to find an alternative, some pundits are going with the “pound the table” strategy and amplifying their original, now disproven, claims.

That brings us to Steve Doocy, who managed to cram about as much untruth as humanly possible into one monologue on Fox & Friends this morning:

Also, this is not good news: remember we blew up the health care system in this country for the Affordable Care Act. And we heard 8 million people signed up. That’s good. Of course, we also heard five or six million got kicked off. The CBO said yesterday at the end of this year, 42 million people will still be uninsured. 42 million! We blew up everything for one or two million while 42 million are still going uninsured? That’s not what we were sold.

Everything about that is bollocks.

Leaving aside the fact that we didn’t “blow up” health care — actually, the Affordable Care Act doesn’t affect a lot of people, which is beginning to show in the polls — the “five or six million people got kicked off” talking point has been debunked and debunked. According to insurance companies, many of those who had policies cancelled because they didn’t meet the ACA’s minimum requirements were rolled over into new, more comprehensive polices; others were allowed to keep their plans under an extension or a hardship clause; still more got health care through the exchanges. Best estimates place the number of people who actually “lost” insurance at half a million.

Doocy also undercounts the ACA’s impact on the uninsured: he’s not including the millions who have enrolled through Medicaid, or young people who were scooped up onto their parents’ plans, or those who signed up on off-market exchanges, a number that could be over two million. A RAND report found that the ACA had already given a net 9.3 million people insurance, and that report didn’t even count the late March/early April surge that saw millions more apply through the exchanges. The CBO actually estimates that twelve million people will be newly insured by the end of 2014, a figure exponentially greater than the one Doocy quoted, and one reflected in the plunging uninsured rate.

Why isn’t that number even higher? Here’s where we get to the most cynical conservative talking point against the ACA: the amount the law leaves uninsured, a number substantially higher than it should be thanks to red states that did not set up their own exchanges, and, more damagingly, did not expand Medicaid. As Gallup found last week, the uninsured rate in states that embraced those two provisions of the ACA was falling three times faster than in states that did not, suggesting a relationship between working with the law and the law working.

There may also be a relationship between Republicans refusing the law and then using that refusal to their own advantage. Rep. Tim Huelskamp (R-KS) took this talking point out for a walk this weekend, crying that Kansas had experienced a net rise in uninsured under the ACA; the claim is almost certainly not true, but if it is, all the worse for Kansas’ decision to reject the ACA’s provisions to widen the insured rolls and leave its own citizens out to dry.

Last, Doocy finds himself a big number with the 42 million still uninsured. As we just covered, a lot of that is thanks to red state governors refusing provisions. But making this claim inexplicably refuses to understand that the ACA is not a one-year policy that expires next December. In fact, there will be enrollment in 2015, and again 2016, and on and on, enrollment that the CBO expects will end up with a net 26 million insured people by 2024—a number the organization just revised up from 25 million. “We blew up everything for one or two million while 42 million are still going uninsured?” is a baffling mendacious statement.

Incidentally, points to Doocy for conceding that 8 million signed up; but new data suggest that number will actually be higher. This guy can’t win for losing.