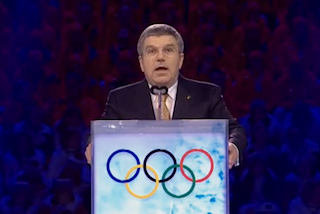 With more than four hours of time-delayed coverage on the 2014 Sochi Olympics opening ceremony last night, NBC still did not have enough time to include everything that took place during the festivities. But one specific omission by the network is drawing criticism today, and it has to do with a pointed anti-discrimination message delivered by IOC president Thomas Bach. Given all the controversy surrounding Russia’s anti-gay laws, Bach’s statement was meaningful and bold. So why, of all things, did NBC choose not to include it?

Deadspin was able to obtain videos of how Bach’s speech appeared in its edited form on NBC, versus how it aired on British TV and elsewhere. Below is the section that did not make it onto TV in the United States (bold emphasis added):

“Now you are living in an Olympic Region. I am sure you will enjoy the benefits for many, many years to come. Thousands of volunteers have welcomed us with the well-known warm Russian hospitality. Many thanks to all the wonderful volunteers. Bolshoi spasiba, valantyoram! Thank you very much to everyone. Russia and the Russians have set the stage for you, the best winter athletes on our planet. From this moment on you are not only the best athletes, you are Olympic Athletes. You will inspire us with your outstanding sports performances. You have come here for sports. You have come here with your Olympic dream. The International Olympic Committee wants your Olympic Dream to come true. This is why we are investing almost all of our revenues in the development of sports. The universal Olympic rules apply to each and every athlete- no matter where you come from or what your background is. You are living together in the Olympic Village. You will celebrate victory with dignity and accept defeat with dignity. You are bringing the Olympic Values to life. In this way, the Olympic Games, wherever they take place, set an example for a peaceful society. Olympic Sport unites people. This is the Olympic Message the athletes spread to the host country and to the whole world. Yes, it is possible to strive even for the greatest victory with respect for the dignity of your competitors. Yes, Yes, it is possible – even as competitors – to live together under one roof in harmony, with tolerance and without any form of discrimination for whatever reason. Yes, it is possible – even as competitors – to listen, to understand and to give an example for a peaceful society.”

Media outlets such as The New York Times acknowledged the comments on Twitter when they were made live in Russia, but after they were edited out the U.S. version, NBC started receiving some backlash from viewers and journalists:

At opening ceremony, Thomas Bach, new president of I.O.C., speaks out against discrimination.

NBC edited out the one moment it shouldn't have from the Opening Ceremony http://t.co/iIXrguHEc0

Dear @nbc, the audacity of your idiocy knows no bounds. http://t.co/eoSldac8SE

.@NBCOlympics: screw you for editing Thomas Bach's anti-discrimination statement out of his speech. $s more important than people? Shameful

NBC on missing remarks on tolerance: "IOC’s President was edited for time, as were other speeches, but his message got across very clearly.”

That section of the opening ceremony was not the only moment to hit the cutting room floor on its way to NBC. In a move not quite as egregious, but equally as shocking, the network decided not to air the most-talked about sequence of the entire show across social media: those Russian police officers performing a seriously epic version of Daft Punk’s “Get Lucky.”