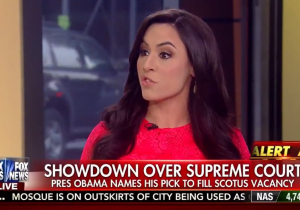 Leave it to Fox News’ Andrea Tantaros to super-sleuth her way to the bottom of President Barack Obama‘s appointment of Merrick Garland to the Supreme Court Wednesday. We knew there had to be a twisted and sinister rationale bubbling below the surface for nominating a reasonable man with an accomplished legal background, right?

As the conversation on Wednesday’s Outnumbered turned to our heathen President who moonlights by pissing on the United States Constitution, Tantaros shared her conspiracy theories as to the SCOTUS nomination. The prestige of this magic trick, according to Tantaros, stems from Garland’s management of the 1997 prosecution of the Oklahoma City bombing case.

And in Tantaros logic, which political demographic in 2016 is most akin to any extremist supporters of the Oklahoma City bombers? Those of Republican frontrunner Donald Trump of course. As Tantaros wonderfully explains:

But I do want to quickly talk about the political aspect of this. Merrick Garland was the one who prosecuted right-wing extremists in Oklahoma City. You heard him mention this. This is Obama’s effort to look bipartisan and reasonable. He knows that the right is divided. He’s capitalizing on that division. He knows that he is going to call them ‘allegedly violent’ Trump supporters — [they’re] going to stand up and he’s gonna say, “You’re blocking him because this is payback because he prosecuted the Oklahoma City Bombers!” He knows that that attack is coming. I believe it is a political trap.

For those of you still scratching your heads over the logic presented there, Tantaros has essentially argued that our nation’s President — who is Constitutionally bound to nominate a vacancy on the Supreme Court (Article II, Section 2, Clause 2) — is playing the old McVeigh-payback card as the reason Garland was nominated. Unsurprisingly, Outnumbered cohost Harris Faulkner quickly changed the subject.

Watch the above clip from Fox News to try and interpret for yourself the syllogism there, if you speak Tantaros that is.
[image via screengrab]
—

J.D. Durkin (@jiveDurkey) is the Senior Editor of Mediaite.