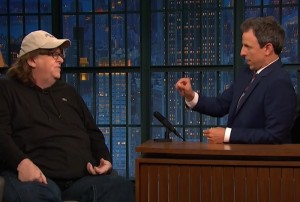 Activist and documentary filmmaker Michael Moore likes to tell the story of how he met now-Republican presidential nominee Donald Trump at a taping of Roseanne Barr’s talk show in 1998, and the real estate mogul begged Moore not to “pick on” him during the show. Moore related the anecdote in an open letter to Trump a few months ago, calling Trump a “fraidey-cat,” but on Monday night’s Late Night with Seth Meyers, Moore said he has since come to the conclusion that Trump’s display of apparent cowardice was merely a clever ruse, and spiced up the anecdote with some graphic advice for Trump:

Moore: I said, “You have nothing to worry about. Come on, we’re going to go out and have some fun with Roseanne.” I’m having to talk him off the ledge from this. You know, grow some gonads, here.

Moore: You know? I mean, it’s kind of like — and so we went out there, and I was very nice to him, and in the years since, I thought, jeez, he is good, because he played me. Because I didn’t go after him or his real estate here or any of that —

Meyers: Because he tricked you into having sympathy for him?

Moore: I felt sorry for him, and the hands were so wet.

As it turns out, though, there was more to Moore’s anecdote than simply to humiliate Trump. Later in the interview, he explained to Meyers why it was that he chose to tell the story that particular way. Moore explained that he has a longstanding bet with his writers and crew that he can work a specified word into any TV appearance:

So the next time you see Michael Moore on TV telling someone not to gild the chrysanthemum, you’ll know why.

Here’s how Moore described that 1998 meeting with Trump back in December:

You may remember (you do, after all, have a “perfect memory!”), that we met back in November of 1998 in the green room of a talk show where we were both scheduled to appear one afternoon. But just before going on, I was pulled aside by a producer from the show who said that you were “nervous” about being on the set with me. She said you didn’t want to be “ripped apart” and you wanted to be reassured I wouldn’t “go after you.”

“Does he think I’m going to tackle him and put him in a choke hold?” I asked, bewildered.

“No,” the producer replied, “he just seems all jittery about you.”

“Huh. I’ve never met the guy. There’s no reason for him to be scared,” I said. “I really don’t know much about him other than he seems to like his name on stuff. I’ll talk to him if you want me to.”

And so, as you may remember, I did. I went up and introduced myself to you. “The producer says you’re worried I might say or do something to you during the show. Hey, no offense, but I barely know who you are. I’m from Michigan. Please don’t worry — we’re gonna get along just fine!”

You seemed relieved, then leaned in and said to me, “I just didn’t want any trouble out there and I just wanted to make sure that, you know, you and I got along. That you weren’t going to pick on me for something ridiculous.”

“Pick on” you? I thought, where are we, in 3rd grade? I was struck by how you, a self-described tough guy from Queens, seemed like such a fraidey-cat.

You and I went on to do the show. Nothing untoward happened between us. I didn’t pull on your hair, didn’t put gum on your seat. “What a wuss,” was all I remember thinking as I left the set.

And now, here we are in 2015 and, like many other angry white guys, you are frightened by a bogeyman who is out to get you. That bogeyman, in your mind, are all Muslims. Not just the ones who have killed, but ALL MUSLIMS.