Heresy! Fox News (And Only Fox News) Talked Over The National Anthem
video

Heresy! Fox News (And Only Fox News) Talked Over The National Anthem 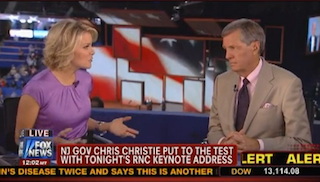 Oh, man. Just now, while tenor Philip Alongi was doing his rendition of the National Anthem at the Republican National Convention, one of our cable news networks had the gall to just go and talk right over it! I just can’t believe it. How dare MSNBC do something so unpatriotic and disrespectful? You know that Fox is going to have around the clock coverage criticizing them for their-

Wait, what? It wasn’t MSNBC? It was Fox News that talked over the anthem?

Yes, following Reince Priebus’ address, Alongi began singing. CNN was airing something else at the time and MSNBC aired the song in full. Over on Fox News, however, Brit Hume and Megyn Kelly acknowledged the anthem before going right back to discussing the convention. As they were literally in an open-air box in the convention center, the anchors actually had to raise their voices to beat out that song that, y’know, is supposed to be important and stuff.

So what does this mean? Well, nothing really. I mean, if one of the other channels had done this, presumably the conservative media would have turned it into a scandal the size of Watergate. Since it was Fox News it probably just means that some poor intern in Fox’s viewer complaint department is going to have to sift through an insane amount of angry emails and phone calls.

Seriously, let us all feel bad for whatever poor sap has that job today.

Interestingly enough, Bret Baier stopped Kelly from almost doing the same thing yesterday, stopping a segment while a prayer was being read. We’ve added that clip below.

Watch both clips from Fox News below: