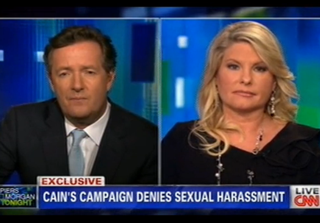 It didn’t take long for Herman Cain sexual harassment accuser Sharon Bialek to hit the cable news circuit after her debut this afternoon, as she stopped by Piers Morgan with attorney Gloria Allred tonight. Revisiting her story, Bialek tells Morgan that she is “absolutely” worried about the impact this will have on her teenage son, but that “I want him to know that his mommy did something good for women,” and she’s “willing to handle” the scrutiny.

Morgan asked her several questions from the perspective of a skeptic after she relayed the core of the story: she went to Cain for help finding a job, he took her to dinner, and assaulted her in a cab on the way home. She told Piers that it was “never my intention from the start” to make money off of the harassment charges– “I’m all about doing the right thing.” She answered she was “absolutely” concerned about her son, but that she wanted to be a good role model, and, in a sense, help Cain come back to his truth, as well. “One of my objectives was to allow him to come forward and redeem himself,” she alleged, “it is unfortunate and I’m very disappointed that he didn’t take the lead in this.”

Allred responded to some accusations leveled at her, too, as Morgan reminded her that the Cain campaign had called her an “activist celebrity lawyer.” She corrected that description to “a women’s right attorney,” noting that her firm specialized in sexual harassment and had one many, many settlements and cases for their clients– a bit of a strange comment given that, as of now, Bialek has claimed not to want to press charges. Allred also reminded the audience that Bialek was a registered Republican with no political motivations, and Bialek herself declined to note whether she would want to see Cain withdraw from the race, only asking for him to “apologize” and “admit it.”

The interview with Morgan via CNN below: