Herman Cain’s Alleged Mistress Ginger White: ‘This Was Not Sex For Cash’ 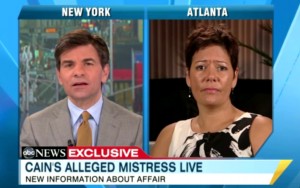 Herman Cain‘s latest drama — an alleged affair with an Atlanta woman named Ginger White — bubbled up again early Wednesday morning as she sat down with Good Morning America‘s George Stephanopoulos, and discussed everything from Cain giving her money to her past financial troubles.

“It’s nothing that I am proud of,” White said of the alleged affair. “I have been absolutely humiliated [and] embarrassed. It’s not been fun.” She characterized the relationship as “on and off,” and said it hasn’t been a consistent love affair over the years. When asked by Stephanopoulos about Cain giving her money, White said that she had been given gifts and money by Cain over the last two-and-a-half years on a consistent basis. But, she said, “this was not sex for money.”

White also supplied GMA with phone records showing scores of calls between White and Cain, some as late as this month. She then defended her lack of proof of the affair in a surprisingly logical manner.

“When you enter into a private relationship that you really do not care to share with the public, you really don’t enter into something like that holding onto receipts, holding on to gifts…[so you can] come out eventually and say, ‘Yeah this is what happened and here’s my proof.'”

She claimed that the relationship with Cain was casual, saying he would fly her out on trips, including a Mike Tyson–Evander Holyfield fight in Las Vegas.

The real subtle beauty of the interview, however, came when White commented on the sexual harassment charges brought against Cain by other women, pointing out that this was an affair, while the other women were harassed. She borrowed Cain’s repeated line from his first post-“9-9-9 Plan” debate to explain it. “We’re really comparing,” she told Stephanopoulos, “apples to oranges.”

Watch the full interview from Wednesday’s GMA below, courtesy of ABC: