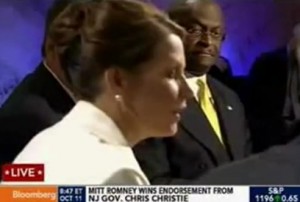 Despite all of the media chatter about a Mitt Romney win at Tuesday night’s Bloomberg/Washington Post Republican presidential debate, the real stars of the show were Herman Cain and his “9-9-9 plan.” While Romney drove the fork deeper into fading rival Rick Perry, aided by Perry’s underwater tape-recorder delivery, it was Cain who gained the most from the debate, deftly deflecting criticisms of his economic plan, which was mentioned a Ron Popeil-esque 25 times during the debate.

The folks giving Romney the win last night aren’t thinking like Republican primary voters, who are watching Herman Cain blast through Romney like a high-fiber pizza crust. It’s true that Romney looked more presidential than his rivals last night, but that’s nothing new, and is the thing that has kept him around 20% in the polls for months. The best example of this was when he shushed a flummoxed Rick Perry back onto his nap mat, but Mitt’s strongest moment came during his defense of the hated Romneycare, during which he implied that opponents of his health care law are heartless, telling Perry, “I care about people.”

The exchange most certainly damaged Perry, but it didn’t help Romney, at least not with the voters who are deserting Perry and lower-tier red meaters like Michele Bachmann and Rick Santorum. If they wanted someone who looked presidential, they’d already be supporting Romney.

Cain, on the other hand, did exactly what he needed to do to maintain his planetary momentum, introducing his 9-9-9 plan early and often. Former Utah Gov. Jon Huntsman‘s “price of pizza” quip might have scored with a general audience (with an affinity for obvious, overdone jokes), but with conservative base voters, it surely registered as the kind of snobbish, dismissive attitude they’ve come to expect from elites.

The 9-9-9 plan even got its own showcase question, which allowed Cain the chance to respond to criticisms of the plan. The video clip that Charlie Rose used to introduce the question got uproarious applause from the audience, and Cain deflected moderator Julianna Goldman‘s question about the plan’s revenue neutrality like a Jedi master. Goldman cited a Bloomberg Government analysis that found a significant revenue shortfall in the 9-9-9 plan.

Cain responded, “The problem with that analysis is that it is incorrect,” to huge laughter and applause from the debate audience. He went on to vaguely challenge the assumptions in the Bloomberg analysis, then added, “We have had an outside firm, independent firm dynamically score it.  And so our numbers will make it revenue neutral.”

Goldman missed the opportunity to follow up on that scoring, which was apparently done by the conservative Heritage Foundation, and has not been released yet. Instead, she asked Cain to “explain why, under your plan, all Americans should be paying more for milk, for a loaf of bread, and beer?”

Cain quipped, “Pizza, I don’t buy beer,” and weirdly (for a question about milk and bread) pointed out that “there is no tax on used goods.”

Before you could say “Herman Cain is in the pocket of Big Yard Sale,” Goldman pivoted to Rep. Michele Bachmann, who zeroed in on the one criticism of 9-9-9 that might resonate with the base, the fact that it gives the government a new revenue stream (the sales tax), and with it, a slippery slope. (Conservatives love slippery slope arguments. I suggest skiing lessons.)

Unfortunately, she pretty much canceled that out by jokingly implying that Cain is The Antichrist. “When you take the 999 plan and you turn it upside down,” Bachmann quipped, “I think the devil is in the details.”

The line got a laugh, but to the kinds of conservative who support Cain, it was likely an eye-roller that reinforced stereotypes of the GOP base as religious zealots, even if jokingly.

Here’s the clip, from Bloomberg TV:

Several other candidates took whacks at Cain’s sales tax, but the real victory for Cain was that they were talking about it. That’s the key to Cain’s surge in the polls, there’s an energy around him that Romney can’t seem to capture. He summed up his appeal well in his response to a process-heavy attack from Rick Santorum on his “naive” plan. “Therein lies the difference between me, the non- politician, and all of the politicians,” Cain said. “They want to pass what they think they can get passed rather than what we need, which is a bold solution.  9-9-9 is bold, and the American people want a bold solution, not just what’s going to kick the can down the table — down the road.”

Cain will surely run into trouble in future debates, where the subject matter won’t be so tightly-controlled and the glare of the top-tier spotlight is on him, but at last night’s debate, at least in the eyes of its key audience, he outshone the rest of the field. The media, and Mitt Romney, dismiss him at their peril.