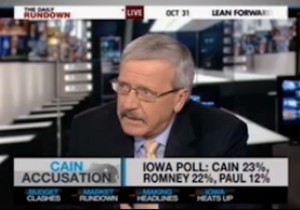 In what might be the only bit of Herman Cain news today that doesn’t have to do with Politico‘s sexual harassment report, Cain campaign manager Mark Block appeared on MSNBC’s The Daily Rundown with Chuck Todd to deny that the campaign is “a front” for the billionaire Koch brothers, joking, “if they are donating to us, their payments are past due.”

After grilling Block about the roiling sexual harassment scandal, Todd asked him to explain the Cain campaign’s connection with the Koch brothers’ Americans For Prosperity. Many of Cain’s campaign operatives come from the Koch-funded AFP.

He also told Todd that he hasn’t seen or spoken with the Koch brothers in about a year, and that the brothers are not Cain donors. “Every time it is suggested in the media that we’re fronts for the Koch family,” Cain said, “I would suggest that if they are donating to us, their payments are past due.”

Block went on to promise that he and Cain will be responding to criticism that the candidate lacks an on-the-ground organization. “They really want to understand how this campaign is structured,” Block said, “what are we doing in Iowa, what are we doing in New Hampshire.”

“I’ll be with Mr. Cain,” he continued.  “I’ll let him answer the questions, the way that we’ve run this thing, and you have to admit that not many people understand why are we first in the polls.”