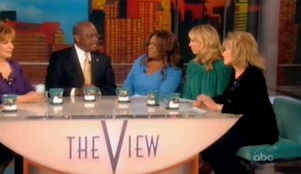 Herman Cain might be out of the race but that doesn’t mean he’s going away! Following in the illustrious “Oh, are they still here?” footsteps of Christine O’Donnell (yes, she’s still here), Cain has taken to the airwaves to further push the 999 Revolution Solution, a plan which, we assume, won’t involve an actual revolution. Today he appeared on The View‘s first show of 2012 and spoke about his former rivals, taking the chance to defend Rick Santorum’s controversial “black people” comment.

Not that Cain was completely behind Santorum, saying that the candidate “put his foot in his mouth.” However, he argued that Santorum was merely proposing an end to an entitlement society and that he just shouldn’t have specified black people…or, uh, blah people.

So, will Santorum be the guy getting Cain’s endorsement? Well, we’ll just have to wait to find out. Cain explained that he will be giving his “unconventional endorsement” on January 19th and that it would be so “unconventional” that the “media won’t like” how he does it. Barbara Walters begged him to give them a hint but he claimed that simply naming someone would be just too darn “conventional” for him.

So, what should we take from this? What kind of endorsement would be so unconventional that it would make the media actively angry? I don’t know but my two biggest guesses are that Cain will either spell his endorsement in Godfather Pizza breadsticks or that he will murder someone and write it in their blood.

That’s where my money is. If you want better predictions, you’ll have to ask Herman Cain to be less vague.