Herman Cain: I Misspoke Earlier When I Said That I’d Negotiate With Terrorists
video

Herman Cain: I Misspoke Earlier When I Said That I’d Negotiate With Terrorists 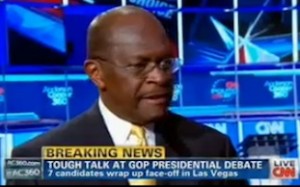 GOP frontrunner Herman Cain was caught in an immediate rhetorical contradiction yesterday, between differing answers he gave when asked about hypothetically negotiating with terrorists. After declaring during the GOP debate that, on principle, he would not negotiate with terrorists, CNN’s Anderson Cooper “kept him honest” by showing a clip in which Cain suggested he would do just that in an earlier interview with Wolf Blitzer. Without mincing words, Cain immediately owned the apparent gaffe, saying “I misspoke.”

CNN’s most recent iteration of the greatest reality show on earth, aka the 2012 GOP Presidential debate series, introduced some debate topics of yesteryear. One of the classics brought up was the notion of “negotiating with terrorists,” which was brought to light by a recent story of Israel swapped over a thousand prisoners for one captive Israeli soldier. It was at this point that Cain averred that he would never negotiate with terrorists.

But earlier in the day, Cain sat down with Blitzer and was asked about the recent story of Israel swapping over 1,000 prisoners for one Israeli soldier. Cain admitted that he would probably do a similar thing in the hypothetical situation presented by the CNN host. It was this clip that was shown to Cain, who quickly jumped on the apparent incongruity.

It was an quick and candid admission of a seemingly honest mistake, and perhaps another example why Cain is doing so well in the polls. Watch the clip below, courtesy of CNN: